EDS Electronics, Inc. made history in the summer of 2014, being the first in the country to implement eVance, a cutting edge advanced reporting software, into the EDS Service Department and the fire and life safety industry of Las Vegas, Nevada.

Released by Honeywell, eVance Services automates and streamlines inspection and service data, reducing labor hours of walk tests and providing more thorough information in a detailed report, compliant with NFPA standards and delivered electronically to our customers in real time. This advanced reporting system reduces errors, eliminates redundancies and allows for greater productivity by barcoding every device and scanning upon testing. Unlike other barcoding systems that can only scan proprietary barcodes, eVance can scan any barcode of any product.

EDS inspectors have spent the last year integrating this system into more than five hundred existing customers’ properties, including the City of Las Vegas and United Health Group properties, receiving praise from customers and Authorities Having Jurisdiction alike.

“The greatest feedback from customers has to do with identifying discrepancies,” said EDS Service Manager, Erin Stevens. “In the past, when we’d write up a discrepancy during an inspection, it would be difficult for customers to visualize what we were describing. With eVance, we can take a photo of the discrepancy that is included in the report. It shows the device model, location and what has caused the device to fail the inspection. This has been hugely helpful to our customers and the AHJs.”

Response from local authorities and fire department officials has been just as noteworthy. With eVance’s Record of Completion Report, EDS is able to prove each device’s location and test result so that the AHJ knows the entire system has been tested one hundred percent.

“They think it’s awesome,” Stevens said. “They had no idea such a thing was possible. When they see what we can and are providing to the life safety industry, the first thing they ask is ‘how come no one else does this?’”

That sentiment is echoed by potential and new customers when approached by EDS.

“I can take a sample 25-page NFPA report into a potential customer to show them the service we provide,” Stevens said. “They are blown away by the professional reporting style and the amount of detail and information that is delivered to them, compared to the one-page reports that most other vendors provide.”

Through the implementation of eVance, EDS has become the industry leader for advanced reporting technology, a position which stands out amongst competitors, according to Stevens.

“There is nothing out there that compares to what we have brought to the industry. Nothing.” 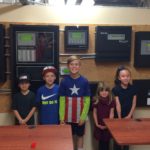 Fostering the Next Generation 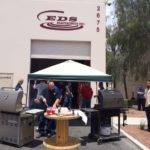 They Will Have Steak! 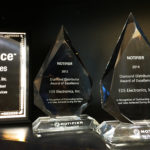 Another Diamond on the Shelf

take your kids to work